Remember when, just a few months ago, the GOP effort to repeal Obamacare failed due to the honorable opposition of just a handful of Republican Senators?  Remember when a couple Republican Senators announced they would not seek reelection in 2018 because of their dissatisfaction with Dolt 45 and with Senate leadership?

Well, that was then and this is now.  The GOP Tax Cut Scam will pass the House today and move on to the Senate later today.  And where are those Republican paragons of principle?  They've turned into pillars of pudding.  That sound you hear is backbones disintegrating. 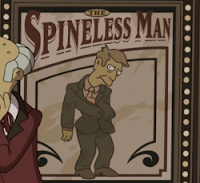 Jeff Flake, who made clear his disgust with Donald Trump and fell on his sword on the Senate floor, has still voted with Trump ever since and will again today.  To get her vote for the tax scam, Susan Collins was given assurance that the Murray-Alexander bill to restore CSR premium subsidy repayments for health insurers would be green-lighted.  She was lied to.  Mitch will not let Murray-Alexander see the light of day, and Collins still supports the tax scam.  Lisa Murkowski was an opponent of the Obamacare repeal, but now for the tax scam, she's OK with sabotaging Obamacare by eliminating the individual mandate.  The great deficit hawk and Trump nemesis Bob Corker was staunchly opposed to this tax scam because it blows up the deficit and adds to the national debt.  But then came a last-minute sweetheart deal to allow large "pass-through" real estate investors to deduct 20% of their income.  And who is a wealthy real estate investor?  Bob Corker.  (As are many other Senators, and Donald Trump.)  Corker decided he could support the tax scam after all. 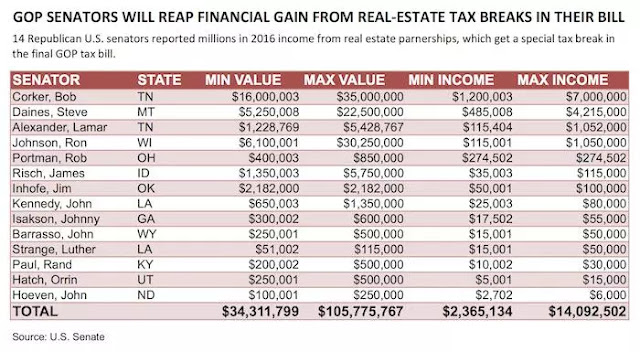 With all these shameless turds ready to do the wrong thing, John McCain may as well stay home in the Arizona cancer ward.  His vote will not be needed.