Our nation began 241 years ago when the majority of citizens rose up in open rebellion against a governing monarchy which clearly did not care about the well-being of those citizens.  The citizens prevailed and the monarchy withdrew from this land. 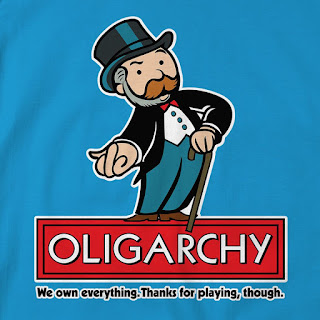 My friends, we are perilously close to repeating that scenario.  The difference now is that we need to stand up against a governing oligarchy rather than a monarchy.  Across the country, the Republican party operates as the handmaiden of the oligarchs, doing the bidding of their corporate overlords with no concern for anything else, least of all the needs and wants of the majority of citizens.

Examples abound -- sabotage of the ACA, repeal of net neutrality, destruction of government protective agencies -- but the best is the Republican tax scam, soon to be passed by Republicans only and signed into law by the useful idiot Trump, over the objections of the vast majority of Americans.

We see through their fraud, but the Republicans simply don't care what we see, say or do.  Their tax scam is not "reform."  It is a blatant, obvious tax cut for those who don't need one, paid for by the rest of us, and we know it.  It is wealth redistribution, wherein the rich get richer and the poor get poorer.  Anyone who claims otherwise is lying, stupid, or both.

Let's have economist Austan Goolsbee of the University of Chicago's Booth School of Business explain the tax scam in simple terms which even a Republican could understand:

Remember the Occupy Wall Street movement from back in 2011?  The Occupy movement may have faded from the scene, but the motivating complaints are even more valid today.  In the past six years, things have gotten nothing but worse.  The 1% control even more wealth and income today, and the Republicans are about to hand them more still.

(If you need a refresher, here's a post on Occupy from 2011.)
http://bustergammons.blogspot.com/2011/10/occupy-movement.html

When their scam becomes law, Republicans will sing and dance and drink beer in the Rose Garden.  They'll celebrate their mendacious "win."  But their win will really be a loss -- the public knows the truth, and we must use it like a club to destroy the Republican toadies in 2018 and beyond.

Johnny Marshmallow has enough.  You and I and Suzy could use a few more marshmallows.  Down with the oligarchy!