Lack Of Sleep Not Affecting His Ability To Cljjryff 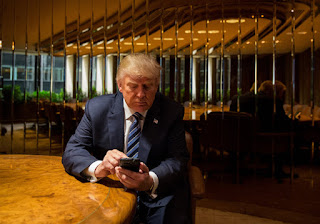 WASHINGTON (The Borowitz Report) -- Donald J. Trump tweeted early Wednesday morning that his habit of sleeping only four hours a day was having no impact whatsoever on his ability to cljjryff.

Trump, who repeatedly touted his high energy level during the 2016 campaign, tweeted that, despite his grueling presidential schedule, he still had enormous reserves of stamina, which called "stamgygygyggy."

In the same tweet storm, he lashed out at news reports questioning his fitness for office, denouncing them as "fakequez%(^."

The White House said that, despite pleas from his legal team to delete his Twitter feed, Trump planned to continue tweeting, and Education Secretary Betsy DeVos would continue to spell-check his tweets.
Posted by Buster at 12:39 PM No comments:


Weren't we warned about disruptive online activity from "a guy sitting on his bed who weighs 400 pounds"?

President Adolph Twitler was at it again last night, his dainty digits tweeting out this inscrutable gem: 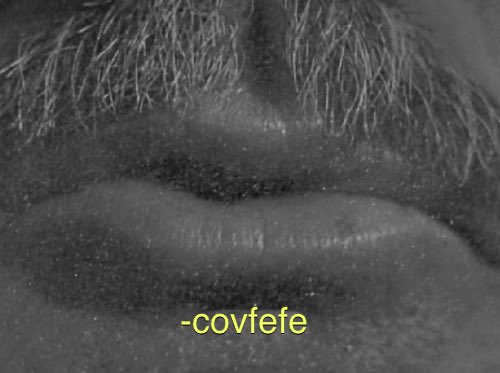 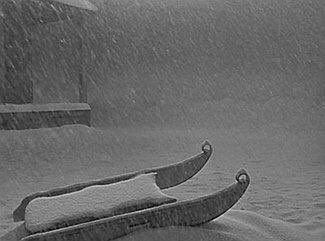 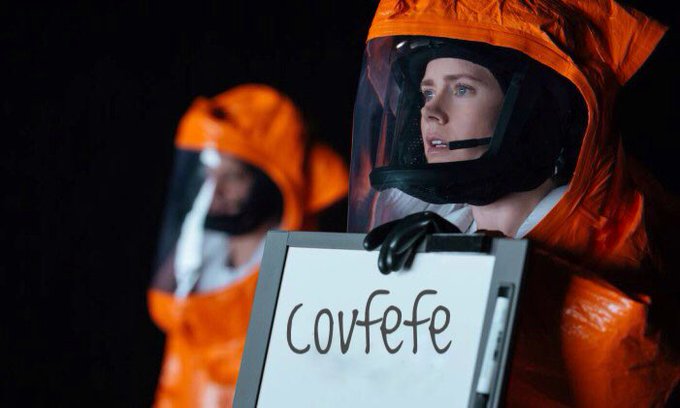 Jackson Dame @jacksondame
okay this is the best I've got #covfefe 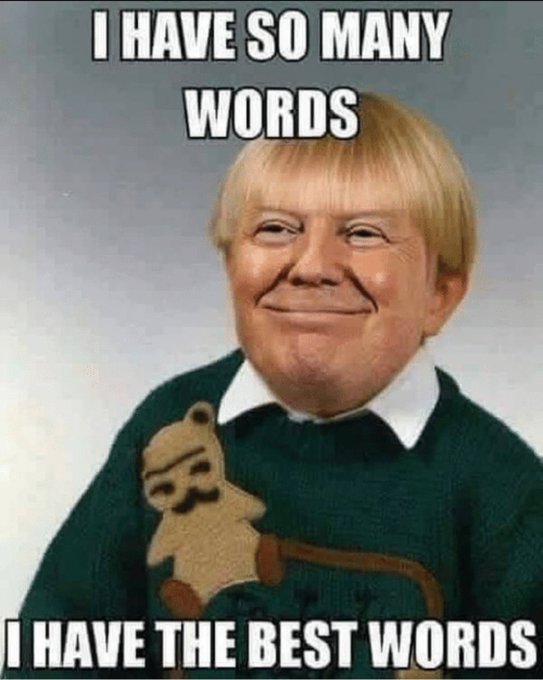 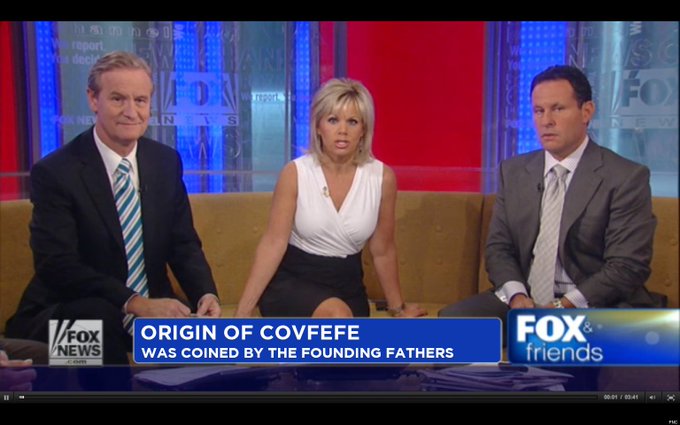 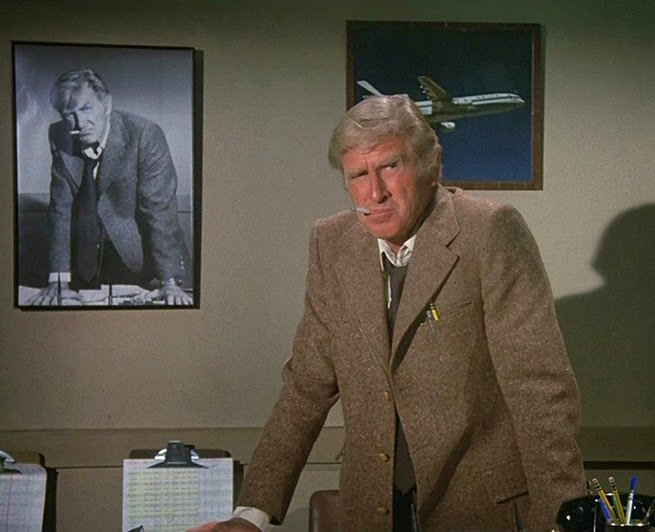 Scott Weinberg
✔@scottEweinberg
"Looks like I picked the wrong week to quit #covfefe." 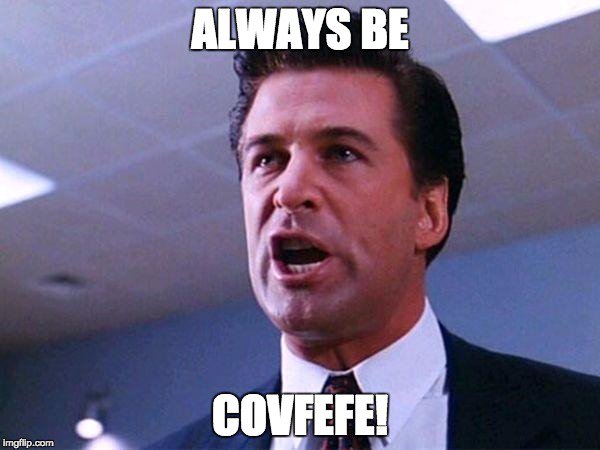 Oliver Willis
✔@owillis
"And the orb, having bestowed upon you the power to smite your enemies, can be invoked using the simple code word '#covfefe '" 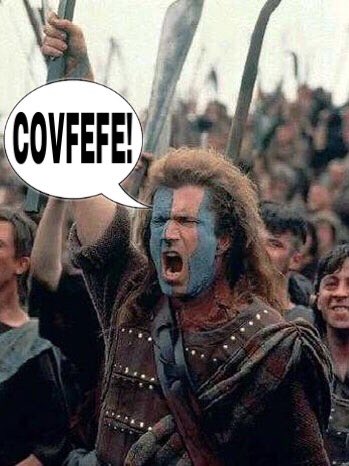 Not A Comedian @obvnotacomedian
They can take our lives, but they will never take our #covfefe 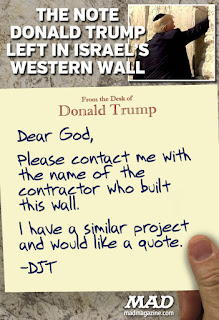 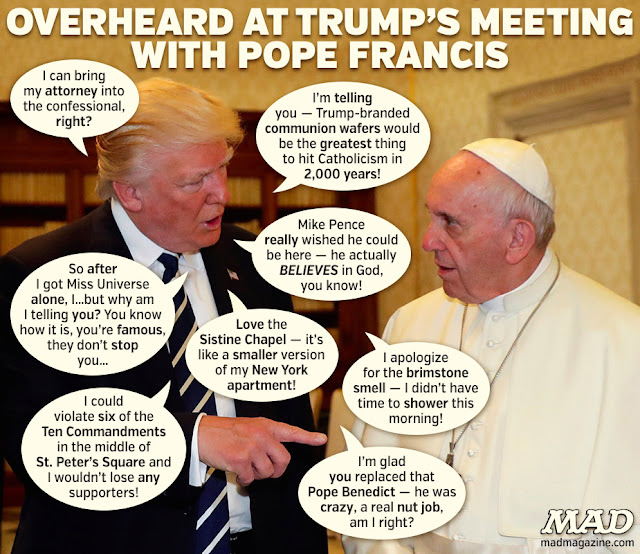 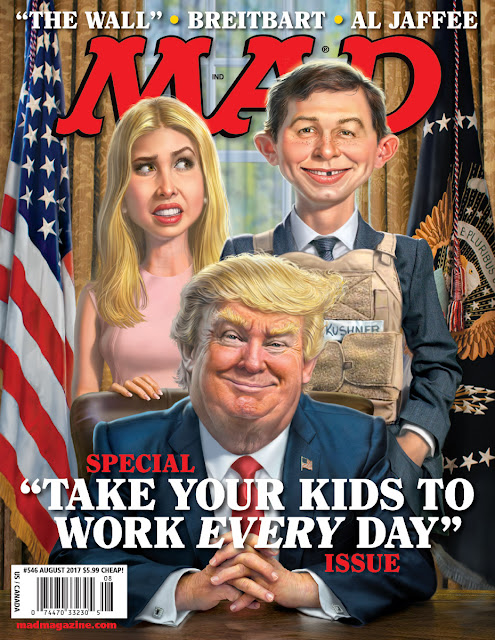 Posted by Buster at 9:23 AM No comments:

Body Language In The Post-Truth Presidency


Body language -- both his and that of the pitiable people around him -- is telling the story of Donald Trump's foreign adventure better than anything else.

When I say "pitiable," I'm thinking about the pope and the first lady, but especially Montenegro's PM Dusko Markovic, who had the misfortune to be standing between Trump and the front of the pack of world leaders, a lesser beauty in the bossy prom queen's path.

But not for long!  Trump batted him out of the way, perhaps mistaking him for a political reporter or picturing James Comey.  Then, triumphal, Trump straightened his suit jacket, stiffened his posture, and raised his fleshy chin.  He was ready for his close-up.

With Trump, his struts, scowls and pouts reveal every bit as much as what tumbles from his lips, which is a lot less trustworthy.  His words can be counterfeit.  His gestures are genuine, and in the post-truth presidency, worth a thousand words. 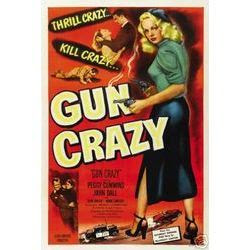 Gun crazy, that is.

Among the many insane bills proposed by gun-nut Ohio lawmakers, House Bill 228 takes the cake.  Under current law, if I kill someone with my gun and claim it was in self-defense, the burden of proof is on me to show that I did indeed act in self-defense.  HB 228 would turn that upside down -- I would no longer need to prove I killed in self-defense, prosecutors would have to prove that I did not!

It's a borderline license to murder.  If I choose my spot "wisely" -- i.e. no witnesses -- I can gun you down in cold blood, claim self-defense, and who's to say it wasn't?  HB 228 also would eliminate my duty under current law to retreat before using lethal force.  I could be the aggressor and provoke the conflict, end it by killing you in "self-defense," and be legally in the clear.

It's Stand Your Ground on steroids, and it's stupid, dangerous and horrible.  Naturally, HB 228 was introduced by Republicans.  Who else?
Posted by Buster at 8:50 AM No comments:


Crass commercialization (is there any other kind?) has overtaken virtually everything, even Memorial Day. 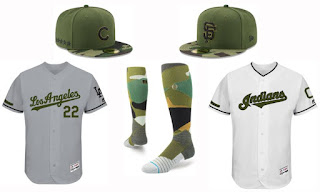 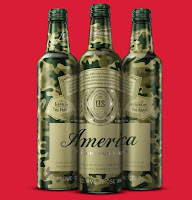 The dead are spinning.
Posted by Buster at 7:08 AM No comments:

We Don't Need To Eat, We Just Need Nutrition


Despite a complete lack of supporting evidence, there remains a sizable contingent of Republicans who are convinced that most poor people are mooches who choose to be poor just so they can live the luxury life on food stamps.  (Average national SNAP/EBT benefit is $133 a month.  Party time!)  This is the sad legacy of Reagan's zombie lie about the Welfare Queen with a Cadillac.

It's a paranoid and punitive mindset, and it's crystal clear in the recent White House budget request, which, among other insults, slashes SNAP benefits by $193 billion over ten years, a cut of over 25%.

Yesterday, NPR's Scott Simon asked Rep. Adrian Smith (R-Neb) if "every American is entitled to eat."  Smith refused to say, trying to slide onto some B.S. tangent about "nutrition."  Simon was having none of it, saying, "Let me ask you this bluntly:  Is every American entitled to eat, and is food stamps something that ought to be that ultimate guarantor?"

Smith replied, "I think we know that given the necessity of nutrition, there could be a number of ways that we could address that."

"For example, for purposes of federal benefits, we could address it by redefining 'nutrition' and expressing it in its most basic form.  In such a reclassification, air would be defined the core element of nutrition -- if you don't have air, all the rest doesn't matter much.  Therefore, anyone breathing the air would be deemed to have sufficient, basic nutrition and would not be entitled to any federal nutrition assistance.  It's brilliant!  We'd save tons on the SNAP program!" 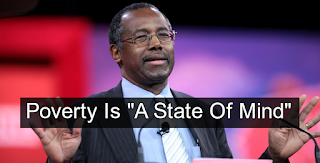 Posted by Buster at 7:21 PM No comments:

Tony Swartz 6 days ago Off the Wire

In an effort to more thoroughly distract viewers from the myriad bombshell reports about President Donald Trump’s administration and campaign, the company that owns the conservative media outlet Fox News has launched a sister channel dedicated to airing old stories about Barack Obama, Bill and Hillary Clinton, and other despised Democrats.
Until now, several Fox News hosts have attempted to deflect attention from the increasingly frequent breaking stories about Trump and possible collusion between his campaign and Russia by discussing past sins of Democratic leaders and their administrations.
The ad hoc strategy has proven effective enough to convince News Corp executives to start Fox News Classic, a new channel designed to blind Fox News fans from Trump’s troubles with rage about events that are no longer pertinent, according to a company spokesman.

“It turns out there’s still a lot of tread on those old controversies, and we’re going to squeeze as much mileage out of them as we can while avoiding covering the troubles of the Trump White House.”

“After seeing Tucker Carlson and Sean Hannity were still getting solid ratings doing stories on ancient news like the Clinton Foundation and Benghazi night after night while every other news outlet was covering the latest Trump scandal, we realized we had stumbled upon a new opportunity,” explained Jim Kennedy, executive vice president and chief communications officer at News Corp. “It turns out there’s still a lot of tread on those old controversies, and we’re going to squeeze as much mileage out of them as we can while avoiding covering the troubles of the Trump White House.”
Kennedy said Fox News Classic will feature extensive coverage of dated topics its core demographic still finds infuriating.
“Fox News Classic is going to have all the stories Fox News viewers love to be reminded of, like Monica Lewinsky, Paula Jones, Whitewater, Sidney Blumenthal, Vince Foster conspiracy theories, Obamacare, death panels, Fast and Furious, Solyndra, and how Obama is going to take away everyone’s guns,” he stated.
Kennedy said the new 24-hour news archives channel’s slogan will be somewhat similar to Fox News’ “We report. You decide.”
“We settled on ‘We remind. You stay mad,'” Kennedy said. “It’s a bit catchier than our original idea, ‘Hey, remember that black Kenyan Muslim and that sexual predator and that sexual predator’s enabling, murderous wife who used to be in the White House? We do! Never forget!'”
In the meantime, Fox News will continue to serve as a valuable source of current news for conservative media consumers, Kennedy insisted.
“Fox News will still be around to nitpick to the nth degree every future misstep of Democrats and liberals, as well as remind people that the liberal media is biased and all lives matter, all while ensuring that President Trump has a loyal friend in the media, despite Roger Ailes’ death,” he added.

Posted by Buster at 3:54 PM No comments:

The Future Of American Healthcare? 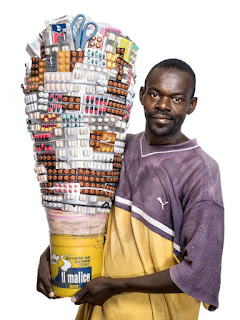 It might look like this, if Republicans continue come up with more bright ideas to protect insurance companies, wealthy individuals and large corporations at the expense of the poor, the sick and the old.

This is how most drugs are sold in Haiti, by unlicensed street vendors.  They might have what you need, and they might cut you a deal.  Or not.

So many factors enter in to our inefficent and ridiculously expensive health care system.  Drug costs are a major part of it.  We need to (1.) Overhaul the patent law monopoly, and (2.) Allow Medicare to negotiate prices on prescription drugs.  (3.) Legalize purchasing prescription drugs from other countries.

Those are the biggies.  If we can't summon the will and get our act together, I may soon find myself in Canada or Mexico, or even in Haiti, looking for a better deal on my prescriptions.

My prescription for Gilotrif, my once-a-day cancer-fighting targeted therapy medication, retails for $8,000 a month.  (Thanks to insurance and the OSU James Cancer Hospital, I don't pay that, but holy shit!)

For an excellent report on this issue, click the link.  aarp.org/lowerdrugcosts
Posted by Buster at 3:43 PM No comments: