Among the worst in the Swamp Cabinet is Ryan "Stinky" Zinke, Interior Secretary.  He's anti-environmental protections, a climate change denier, and a big proponent of selling off public lands and/or allowing private logging, mining, and drilling. 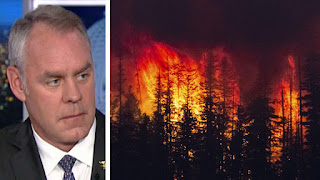 Zinke's bright idea for helping California with its wildfires is . . . cut down more trees in national forests.  He called for "timber harvests" and "aggressive forest management" to stop the fires from spreading.  Well-known firefighting expert Dolt 45 agreed, tweeting that California "must tree clear."  He also blamed the state for "bad environmental laws" and for water "being diverted into the Pacific Ocean."  (Isn't that where California water would go?)  Zinke said the raging fires had "nothing to do with climate change" and instead blamed "radical environmentalists."  Basically, Zinke and Trump fault the State of California.

Last night, an acquaintance with a right-wing bent echoed the Zinke-Trump logic, 'splaining to me that "you just can't have 80,000 acres of forest with no fire break."  Oh, OK.  Whatever you say, John Muir.

I say, why the hell can't you have 80,000 acres of forest?  This continent was once covered in forests before human beings started "managing natural resources."  Even today we have many national forests with millions of acres of trees.  Ohio's dinky Wayne National Forest has 240,000 square acres of trees. 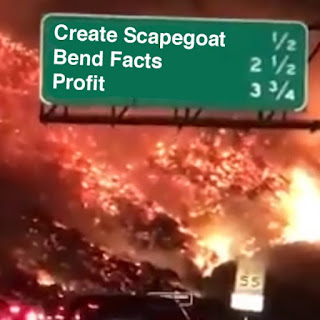 The problem of increasingly frequent wildfires has little to do with the size of wooded areas.  It has much more to do with environmental conditions -- drought, rising temperatures -- which tend to make the fires larger and more extreme.  It's man-made climate change, dummy.

And, Mr. Zinke, the solution is not to pave paradise and put up a parking lot.
Posted by Buster at 7:28 PM