The Government We Deserve?


"In a democracy, the people get the government they deserve." -- attributed, variously, to Joseph de Maistre, Alexis de Toqueville, Thomas Jefferson, Alexander Hamilton, and others

By now, it's crystal clear that Donald Trump is a total scumbucket -- a lying, cheating, egomaniacal, thoroughly corrupt scumbucket.  Everyone knows this.  Sadly, about 35% of the public doesn't care.  In fact, they like it that he's such as asshole.  Because they are too. 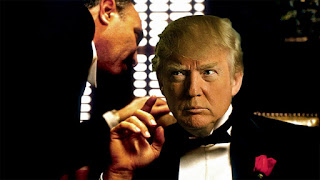 But the rest of us have had it with this fraud, this criminal charlatan.  He's a crook surrounded by other crooks.  His personal attorney Michael Cohen and his campaign manager Paul Manafort are guilty of felonious bank fraud, tax fraud and campaign finance violations.  (Only "the best people.")  Trump himself is, at this point, basically an undicted co-conspirator.  His reaction to these recent developments is pure Mob Boss:

Manafort clammed up, did not testify at his own trial and had no defense -- just what a loyal goombah is supposed to do.  Naturally, Don Frito Corleone praised him.  "Such respect for a brave man!  He refused to break."  (Translation:  "I will pardon you.")

Cohen, on the other hand, copped a plea, sang to federal prosecutors and wants to sing to Robert Mueller.  That's a mortal sin in Mob Land.  To Don Frito, Cohen's a rat who "made up stories to get a deal."  ("Prepare the concrete overshoes!")

So this is our government today:  We've got Al Friggin' Capone in the White House!

We're saddled with this government because too many people beyond the 35% deplorable base went brain dead and somehow convinced themselves that a vote for Trump was better than a vote for Hillary.  Puh-leeze!  Hillary may have her baggage but she'd have been far superior to the daily shit show inflicted upon us by Don the Con.  A lot of unthinking Trump voters are finally figuring this out.

The 35% are getting the government they deserve, but the rest of us deserve better -- much, much better.  It starts to get better in November.  VOTE!  And vote smart.  You know what that means.