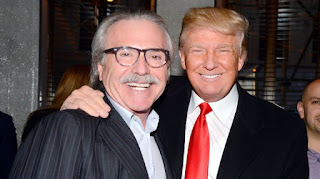 David Pecker is the Chairman of American Media Inc., which publishes the schlock tabloid National Enquirer.  He's a longtime friend and helper of Donald Trump, using the "catch and kill" payoff technique to keep unflattering Trump tales out of the news.  He reportedly has a safe filled with such dirt on The Donald.

Yesterday, Pecker took an immunity deal in exchange for telling federal prosecutors all he knows about the who-when-why of Trump's numerous hush-money payments.

Naturally, a deluge of pecker jokes ensued.  Sophomoric yes, but still funny.  My morning email led with this from D.W., a regular reader:

And there were plenty more out there, e.g.:

Trump Loses Pecker
Trump's Pecker Cooperates, Melania Thrilled
Trump Didn't Wrap Up His Pecker
Shoulda Put A Condom On That Pecker
Betrayed By His Own Pecker
His Pecker Isn't Working For Him
Pecker Caught In Vise
Pecker Inserted Into Trump Drama

And my personal favorite, courtesy of Michael McKean:

"Mr. Pecker does not appreciate all the childish jokes about his name." -- National Enquirer/AMI spokesperson Fanny Goblincock