Ten years ago, I felt that the election of Barack Obama signaled some sort of turning point in American race relations, a clear indicator of progress.  It was a turning point, alright, except things got worse, not better.  The mere presence of The Black Man in the White House brought out a surprising amount previously hidden racism in a lot of white people.  And now the Bombastic Bozo occupying the White House has fanned the flames of racial enmity to a shocking degree.  His obvious racism encourages and enables other racists.  Nowhere is this frightening phenomenon more apparent than on social media (which ceased to be "social" long ago).

For unknown reasons, the lovely Mrs. Gammons is a Facebook "friend" with the younger brother of her sister's first ex-husband.  (Got that?)  They attended the same high school.  Now in his early sixties, this man was raised -- as was Mrs. Gammons -- in the country club lifestyle of a hoity-toity, lily-white Cincinnati suburb.  He's led a life of comfort and ease in the Queen City. 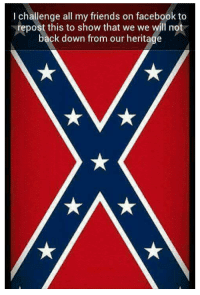 He's also become an angry wing nut, a rabid Trumpanzee, and a flaming racist fuckwit -- charming traits he displays daily on his FB page.  Normally, Mrs. Gammons simply spies on his right-tarded posts without comment, just shaking her head in disgust.  But yesterday, she couldn't hold her tongue (or fingers, more accurately.) 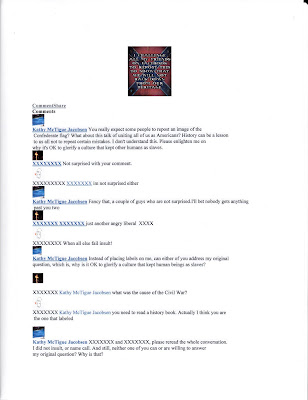 KMJ (Mrs. Gammons):   You really expect people to repost an image of the Confederate flag?  What about all this talk about uniting us as Americans?  History can be a lesson to us not repeat certain mistakes.  I don't understand this.  Please enlighten me on why it's OK to glorify a culture that kept other humans as slaves.

JS (the aforementioned classmate):  Not surprised with your comment.

JC (another ex-classmate):  I'm not surprised either.

KMJ:  Fancy that, a couple of guys who are not surprised.  I'll bet nobody gets anything past you two!

JC:  When all else fail [sic] insult!

KMJ:  Instead of placing labels on me, can either of you address my original question?  Why is it OK to glorify a culture that kept human beings as slaves?

JC:  You need to read a history book.  Actually, I think you are the one that labeled.

KMJ:  You guys, please reread the whole conversation.  I did not insult or name-call.  And still, neither of you can or are willing to answer my original question.  Why is that?

JC:  This all started simply because we posted the post.  You are the one that has the isues [sic].

Racism is alive in the Queen City!  And what a shame, because it's such a nice, attractive town in almost every way.  I realize that racism lives everywhere, and I know most Cincinnatians aren't blatant racists, but to paraphrase Nina Simone, Cincinnati Goddam!