Trump In Trouble? Go To The Guns!


I couldn't help but notice some of the advertising this morning in my home town fish-wrap.

With both his personal attorney and campaign manager guilty of tax and bank fraud and campaign finance violations, fake president Donnie Dipstick is in the deepest yogurt yet of his brief but notorious term as White House resident.  He's denying and deflecting and tweeting his 239-pound ass off night and day.

In this fraught environment, two remarkable gun ads ran in my local rag.

In the Sports section, four full pages were devoted to advertising for Vance's Guns and Ammo.  By my count, the spread featured 104 different firearms in full color, with prices.

Even more remarkable was the half-page ad shown here from a Colorado outfit called Heroes & Patriots LLC.  The "Trump 2020 Rifle" is covered with tacky right-wing engravings and every purchase includes a free hat!  With Hair Furor and his henchmen mired in graft, corruption and disgrace, the sub-heading "Mr. President, Keep Draining the Swamp" is richly ironic. 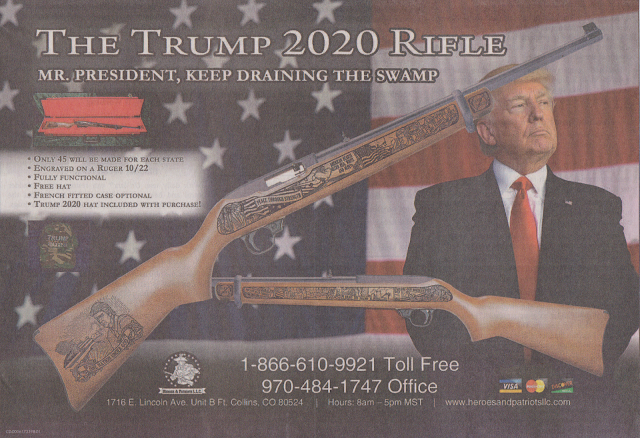 It's hard to read all the engravings on this crappy carbine, but they include:
"Peace Through Strength"
"Stand For the Pledge of Allegiance and the National Anthem"
"One Nation Under God" (with Trump as God)
"Drain the Swamp"
"Politically Correct"
"Secure Our Borders"
"American Hearts Bleed Red, White & Blue" (especially when shot)
"Fake News" with the circle-and-slash "No" symbol

The timing of these ads, running as Trump finds himself in lots more trouble than usual, is probably a coincidence.  But maybe not.  Maybe they're a ploy to fire up the few faithful fuckwit Trump supporters who still remain.