The Lie That Will Not Die


This may be his biggest lie of the day (so many to choose from!): 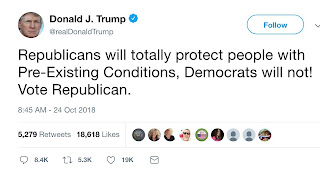 This is the complete and total opposite of reality, of truth.  The Daft Twerp is joined in this outrageous whopper by every lying sack-of-shit Republican running for office -- an entire political party of blatant liars.

Democrats gave us the ACA -- the only thing, ever, which guarantees full, fair and nondiscriminatory coverage of pre-existing health conditions.  Prior to the ACA, there was no such guarantee.  And Republicans have tried from the outset to get rid of it.

Our Mango Mugabe lies all day, every day.  The mainstream media, which he despises and attacks publicly, fact-check his statements and call out his lies.  This is not bias, it's not inaccurate, and it's not fake news.