The lovely Mrs. Gammons once asked the following of a veterinarian:  "Our mini-dachshund is a smart little dog.  Why does he keep pooping in the house?"  The vet replied, "Oh, he knows better.  He just doesn't care."

Such is the corruption of today's Republicans -- they know, they just don't care.  So of course, they went ahead and did it, laughing all the way.  BooFFFFy Bart O'Kavanaugh will now plague American jurisprudence for decades to come.  It's not good, it's not funny and it's not "winning."  But sadly, it is real.

What a Kabuki sham!  What a farce!  What a slap in the face to American women!  It's not that they didn't believe Christine Blasey Ford and the other women, it's not that they don't know what an egregious liar Kavanaugh is, it's that they just don't care.

Jeff Flake, your name is spot-on, you invertebrate weasel, you piece of dandruff!  You're a guy who claims to be appalled by Trumpolini's behavior and tactics, but after much public hand-wringing, you always do exactly what he wants.  "Conscience of a Conservative" my ass!  Conscience of a chicken-shit.  You're a fake, Flake.  Hurry up and retire, then fuck off.

Susan Collins, the next time someone says you're a "moderate" I'm gonna throw up.  There is no such thing as a moderate Republican.  You just like to play one on TV (after enjoying a Devil's Triangle with Kavanaugh and Mitch McConnell).  You think Trump's pretend FBI investigation gave you enough cover for you to claim, with a straight face, that although you believe somebody did something awful to Dr. Ford, you also believe it wasn't Kavanaugh.  Must have been his evil twin, huh?  I believe you're a traitor to your gender and a doddering old fool who has performed her last charade.  You are done.  If you run for re-election, the residents of Maine ("Steven King, two lobsters, and a bear" -- Bill Maher) will vote you out.

And Joe Manchin?  What is up with you?  You're a "yes" to confirm someone who will vote to overturn Roe v. Wade, and vote to sabotage the ACA and its Medicaid expansion?    And you represent West Virginia, where unwanted teen-age pregnancy is the state pastime and half the population is rolling around on government-paid Hoveround scooters.  Brilliant!  Every time you have a chance to do some good and move your state forward, you do the opposite.  Your Trump-pleasing vote does nothing for your constituents, and it helps to preserve your state's image as the home to backward, ignorant hillbillies.  You're a fraud, Joe -- a poor excuse for a Democrat.  Go choke on some coal dust!

Dear readers, there are no more reasonable, respectable Republicans.  None.  They no longer exist. 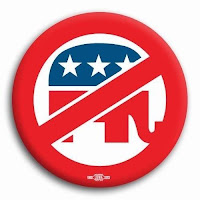 There is only one way to put an end to this madness, and it starts November 6th.  It's time to wrest control from the corrupt and dangerous Republican party, take back the reins of power and turn things around.

Respect yourself and vote for Democrats, federal, state and local.