Right-wing crazies will believe anything that Donnie Diablo tells them.  I see it here in Buster's Blog, in a recent spike in angry anonymous comments.  Some troll wanted Border Patrol to deliver all the Central American refugees to my door, and called me a "distinguished intellectual elite."  (Why, thank you!)

And sadly, in the past two days we've seen a spike in real-world right-wing craziness as well, far more serious than blogosphere flame-ons.  Some person or persons attempted to mail package bombs to Barack Obama, Hillary Clinton, Eric Holder, Maxine Waters, George Soros, and the CNN building as well.  The [fake] return address on several of them was Debbie Wasserman Schultz.  The common thread is obvious -- people who've been critical of our Dictator-Tot.

After hours of Twitter silence, a White House speechwriter dutifully churned out a perfunctory "condemnation" for Trump to read, and he read it (even though he had to pronounce some big, unfamiliar words, e.g. "egregious.")  But his condemnation rang hollow.  And his call for "unity" is flat-out laughable.  That's because Trump is the very reason why such a statement was necessary -- he's the instigator, the motivator, the enabler of this terror.  He's the biggest purveyor of disunity we've ever seen.  His violent, fascist rhetoric, his constant lies, his incendiary attacks on the free press have had the intended effect -- instability and chaos just before a crucial election.

It's not a coincidence.  In essence, he asked for it, and some wing-nut was only too happy to comply.  Next time, maybe they go to guns.

Enough of this bullshit!  Enough of Trump!  The demented pig has gotta go, one way or another.  Unlike Trump himself, I won't advocate violence.  (But if His Lardship was to eat one KFC bucket too many and croak from a coronary, I can't say I'd shed a tear.)  No, the best way, the most satisfying way to remove Our National Disgrace will be at the ballot box.  We end his Reign of Terror by voting him out in 2020!

It starts by sending him a clear message on November 6th.  There's not a single Republican -- federal, state or local -- who's willing to stand up to Trump and call him out as the dangerous, corrupt lunatic he truly is.  They're all in Trump's pocket now.  A vote for any Republican is a vote for Trump, and if you vote that way, you're as big a lunatic as he is.

So vote Democrat all the way!  It pisses off the right people, and it will make a difference in our future. 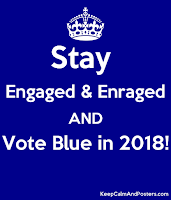