We Have Met The Enemy, And He Is Us


It's just so goddamned embarrassing to be an American right now.

Before flying to Canada for the G-7 meetings, Trumpolini held an impromptu presser in which he flung about a hundred shit-bombs in 15 minutes.  Did you happen to catch it?  It was amazing/awful.  A disjointed festival of rapid-fire lies ("I'm innocent!"  "No collusion!"  "I can pardon myself!") capped by the recommendation that Russia be allowed to rejoin the Group, after it was kicked out for seizing Crimea.

Once at the G-7, Trump again showed the world what an ignoramus he is.  Having previously announced ill-advised trade-war tariffs on Canadian and Mexican products (our neighbors and allies), Trump initially signed on to the usual G-7 joint statement of fuzzy general agreement on fuzzy general issues, but then petulantly withdrew American support after Canadian PM Trudeau reiterated that his country would have no choice but to retaliate with its own trade sanctions against America.  Trump personally attacked Trudeau on Twitter.  Hey, what are "friends" for?  Trudeau was backed by France, Germany and the other nations of the G-7.  F-U, Donald!

Trump then left early to avoid those useless G-7 meetings on climate change, because just like the Russia-Mueller probe, global warming is just a Witch Hunt Hoax.  Right!

These lightly-altered images from his brief, pouty G-7 visit are spot-on. 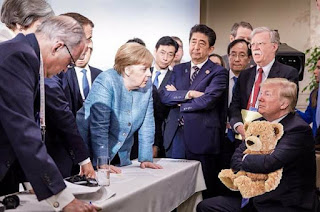 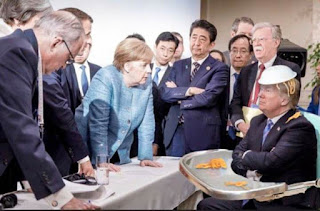 Our global image is shit.  "America First" is America alone.  The G-7 is now the G-6 plus the Ugly American Asshole.  Our nation has become the world's bully.  It's embarrassing.  2020 can't come soon enough.

These days, I'm constantly reminded of Pogo, by the late, great Walt Kelly.