The Tarnished Idea of "Leave It To The Markets" Capitalism 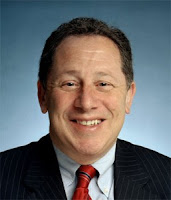 
"We have also lost sight of the philosophical ideas that historically gave national governments their authority. The current argument that larger government impinges on rather than protects or advances individual liberties is a far cry from the ideas that fueled England's Glorious Revolution and the American Revolution. It ignores the fact that the void created by smaller government is often not filled by liberty. When matters like the global environment or regulation of derivatives trading are left entirely to market forces, for instance, outcomes tend to serve the most powerful, because markets neither have a conscience nor do they ensure opportunity. Rather, they seek efficiency, and efficiency loves scale, and enterprises that grow to scale become elephants stamping out opportunities around them."
Posted by Buster at 7:47 PM