Obama Does Too Have Cojones! 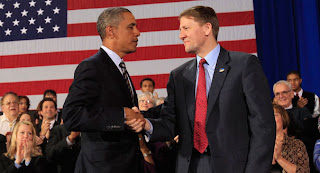 Proving that he does in fact possess a set of at least medium ones, President Obama appointed Richard Cordray as Director of the Consumer Financial Protection Bureau. It was a so-called "recess appointment" --the president has the authority to make certain appointments while the Senate is not in session, and such appointments are not subject to an immediate confirmation process. The appointed individual takes office immediately, and Cordray did.

Many Senate Republicans howled in protest: "We were in session! We were not adjourned!" They were referring to a bit of procedural baloney know as the "pro-forma session", where everyone has left town except for one flunky Senator who shows up every day to gavel an empty chamber into open session . . . of nothing-ness. "We're in session, but nobody's here. Hah!"

Both sides have pulled this pro-forma trick, but it's utter horseshit, and it really needs to stop. The Cordray appointment may be the thing that finally stops it. The R's scream "Unconstitutional!" and threaten to sue. Frankly, Obama would welcome such a fight.

The GOP is rigidly opposed to the CFPB itself, and had promised to prevent the confirmation of any director until the agency was changed and weakened to their liking. So then, what's a president supposed to do? Faced with such intransigent obstructionism, Obama did what he had to do, the only thing he could do. And he did the right thing.

Here's what's kind of bizarre about the R's position on this: Everyone agrees that the Crash of 2008 and subsequent Great Recession was the result of the Republicans' pet policies of deregulation and laissez faire oversight. But instead of humbly acquiescing to the rather modest watchdog powers of the CPFB, they go all in for even less oversight. Incredible! According to them, the best way to prevent a recurrence of greedy, stupid Wall Street schemes is to let the financial industry self-regulate to an even greater extent. "Just get Big Government out of our hair and we'll make everything wonderful in a jiffy."

They watch the boats sail away and disappear over the horizon, and conclude that the earth must be flat.
Posted by Buster at 11:36 AM