The North Carolina Board of Elections has invalidated the 9th District Congressional vote due to election fraud perpetrated on behalf of Mark Harris, the GOP candidate.  There will be a new vote.  Harris edged Democrat Dan McCready by a mere 900 votes.  Most of those were absentee ballots illegally collected and completed by GOP operative McRae Dowless, who's been indicted and arrested.  Harris will not participate in the re-vote.  Good.  Incredibly, Mitch McConnell is blaming Democrats for Mark Harris's fraud, because D's don't support voter ID laws.  Mitch calls it a clear case of voter fraud.  Clearly, it's not.  No voters engaged in in-person voter fraud, e.g. passing themselves off as another person.  Instead, the Harris campaign tried for a large-scale absentee ballot scam, submitting fraudulent ballots.  That's election fraud, not voter fraud, and Mitch doesn't know the difference. 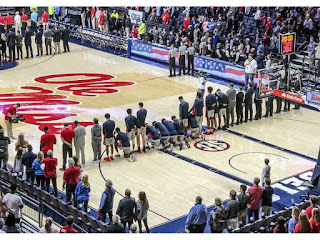 Some Ole Miss basketball players took a knee last Saturday during the national anthem to protest an on-campus rally by white supremacist shitheads in support of Confederate monuments and rebel flags.  Pssst, white supremacists!  The Civil War is over.  You lost. 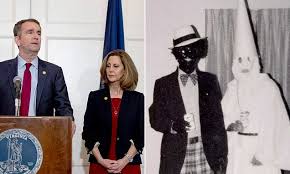 Pam Northam, wife of Virginia governor Ralph Northam, handed cotton balls to two 8th-grade black girls on a school tour of the governor's mansion and asked them to imagine being slaves and having to pick cotton every day.  What the hell was she thinking?  Does she enjoy bad press?  She sure got some.  Not a good look from the wife of the Virginia governor who's a fan of blackface and KKK costume.  Especially during Black History month.


Alva Johnson is a former Trump campaign worker.  She's also #22 -- the current number of women accusing Dolt 45 of sexual abuse, harassment, assault, unwanted contact, and/or rape.  Johnson says at a rally in Tampa in August 2016, behind a campaign RV, Trump approached her, grabbed her firmly and forcibly kissed her without her consent.  Johnson quit the campaign in October 2016, just after the release of the Access Hollywood tape.  This Monday, she sued Trump in federal court, charging him with sexual assault. 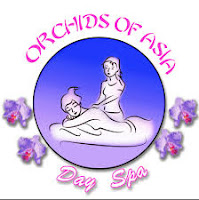 Bob Kraft is the wealthy 77-year-old owner of the New England Patriots, close friend of Donald Trump's, and disciple of Trump's sexual procurement habits.  Kraft has been charged in Jupiter, Florida with soliciting prostitution at the Orchids of Asia massage parlor on January 19th.  Captured on video, not only did he solicit, he received.  He came back the next day and received again, then flew off to Kansas City to watch the Patriots defeat the Chiefs in the AFC championship game.  Perhaps the key to the Patriots extraordinary record of success is the boss obtaining a "massage" on game day.


The Great Negotiator goes halfway around the world and whiffs.  Trump travelled to Viet Nam to meet again with his lover and pen pal, Kim Jong Un, to try again to get North Korea to agree to nuclear disarmament.  I was hoping Trump could get it done by promising to stay forever with Kim in connubial bliss in Pyongyang.  But alas, they must have had a lovers quarrel.  Trump arrived in Hanoi on February 26th, and two days and two dinners later was on his way home having accomplished nothing.

Trump must have some serious dirt on Japanese P.M. Shinzo Abe.  He asked/begged Abe to nominate him for the Nobel Peace Prize.  WTF?  Incredibly, Abe did just that, although no one can cite any evidence of Trump promoting peace.  Is there a new Nobel Lying Prize?


Trade talks continue between the U.S. and China, and formal memos of understanding -- MOU's -- are being drawn up as the basis for a comprehensive agreement.  Not unusual, except that Trump doesn't understand MOU's, doesn't like the phrase.  During an Oval Office meeting with U.S. Trade Rep Robert Lighthizer, Chinese Vice Premier Liu He, and Trump, Trump declared he had no use for memoranda of understanding "because they don't mean anything."  That led to this exchange:

LIGHTHIZER:  An MOU is a contract.  It's the way trade agreements are generally used.  It's not a term sheet.  It's an actual contract between the two parties.  An MOU is a binding agreement.  And that's what we're talking about.  It's detailed, it covers everything.  It's just called a memorandum of understanding.  That's a legal term.  It's a contract.

TRUMP:  By the way, I disagree.  I think that a memorandum of understanding is not a contract . . .

At this point, China's VP actually started laughing, amazed that Trump and his top trade rep couldn't agree on the purpose and significance of an MOU, on the definition of a routine phrase.  Lighthizer, embarrassed by having been incorrectly corrected by his boss in front of his Chinese counterpart, came up with a solution:  stop using the phrase that Trump doesn't like.

LIGHTHIZER:  From now on, we're not using the words "memorandum of understanding" anymore.  We're going to use the term "trade agreement."  All right?

LIGHTHIZER:  No more.  We'll never use the term again.

LIGHTHIZER:  We'll have the same document.  It's going to be called a "trade agreement."  We'll never use "MOU" again.


That's Trump in a nutshell:  knows less than he pretends to; is more interested in what things are called than what they do.  You can't have a memo of understanding with a guy who understands nothing.  And Trump has never had respect for any contract.

If you can't beat 'em, cheat 'em.  Mexico won't pay for it.  American citizens are opposed.  U.S. Congress refuses to fund Trump's stupid wall.  So Dolt 45 declared a #FakeNationalEmergency and gave himself an unconstitutional authority to grab the power and money to build the wall on his own responsibility.

Donny Dishonesty is continuing his disreputable efforts to decades of climate science.   The Koch-sucker is assembling a "Presidential Committee on Climate Security."  Its purpose is to conduct "adversarial scientific peer review" on climate science, i.e. to be professional climate change deniers.  Trump's pick to head the panel is William Happer, a retired a physics professor with no background in climatology, just crackpot opinions -- climate science is a "cult," carbon dioxide is "not a pollutant," it is demonized just like the Jews were under under Hitler, carbon dioxide is "actually a benefit to the world, increasing it will be good for the human race."


The GOP at the house oversight Cohen hearing was childish and embarrassing.  Led by T-Baggers Jim Jordan and Mark Meadows, they decorated the hearing room with posters attacking Michael Cohen.  Posters!  Is this a junior high, or the House of Representatives?
The R's did not care to learn anything from Cohen.  They asked him no questions.  They were there to denigrate Cohen and call him names ("liar!"), and to defend Trump.
Fla. Rep Matt Gaetz sent a threatening tweet to Cohen.  The Florida Bar is now investigating Gaetz for witness tampering.  N.C. Rep Mark Meadows brought along Lynne Patton, HUD official and former Trump party planner.  Her purpose was to stand there silently being black, a human prop "disproving" Trump's racism.  Sure.


The best parts of the day-long hearing were the emotional closing remarks by the Committee Chairman, Eli Cummings D-MD.  If you missed his powerful words, here they are again.  Watch him: