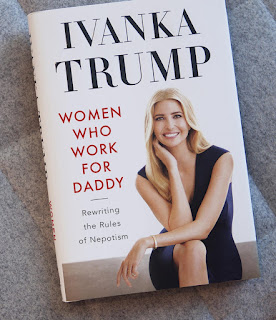 From the start, White House security officials were reluctant to approve Javanka for top-level security clearances, so Trump pressured Chief of Staff John Kelly and administration attorney Don McGahan to do it.  They refused, so Trump did it himself in 2017.  Straight nepotism from Daddy Dearest.

It should never have happened.  Jared is up to his neck in Russian and Saudi money, and Ivanka pushed her merchandise lines in the Far East.  Neither are exactly top-security material, just greedily money-motivated.

And when asked directly about Javanka's undeserved security clearances, both daughter and father lied awkwardly, as is their habit:

Ivanka:  The president had no involvement pertaining to my clearance or my husband's clearance, zero.

NYT reporter:  Did you tell General Kelly or anyone else in the White House to overrule security officials?

Donald Trump:  I don't think I have the authority to do that.  I'm not sure I do.

NYT reporter:  You do have the authority to do it.

No, of course he wouldn't.  But his 2020 federal budget proposal includes not only an $8.6 billion request for his hateful wall which no one wants, but also a $100 million request for Ivanka's "global women's fund."  He would do that.  Daddy Dearest would not hesitate to throw $100 million of our money at his daughter.

It's things like this which nauseate most people.  It's why anti-nepotism policies, such as they are, exist.