He ran a consulting firm known as "The Torturer's Lobby."  He has recently been found guilty of tax fraud and bank fraud, and of hiding millions earned as an unregistered Ukranian lobbyist, and of witness tampering.  So naturally enough, the federal judge presiding over the sentencing of the tax and bank fraud crimes, Judge T.S. Ellis, opened his remarks by declaring that Paul Manafort had "led an otherwise blameless life."  Ellis is a conservative old crank appointed by Reagan.  Manafort's crimes carried sentencing guidelines of 19 to 24 years.  Ellis gave him 47 months, less time already served, for a net sentence of just 3 years.

Yeah, on the tax and bank fraud charges, Manafort was lucky.  He got off more than Robert Kraft at the Orchids of Asia Day Spa, but this Wednesday is Round Two -- his sentencing for the rest of his most recent crimes.  Different court, different sentencing guidelines (10 years), and a different judge, Judge Amy Berman Jackson.  Signs are that Judge Jackson will not consider Manafort otherwise blameless, and will sentence him appropriately.

Meaning Paulie will be 80 years old, give or take, when he's finally sprung from the can, and thankfully, we can avoid hearing about his skeevy ass for a good decade or more.

When he cools his heels once again, does the fashion plate appear more blameless in prison green or prison orange? 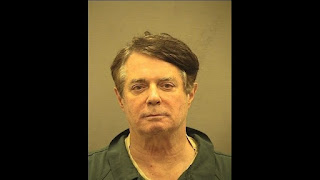 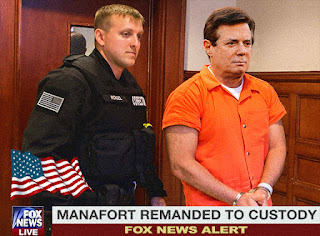